Products featured are independently selected by our editorial team and we may earn a commission from purchases made from our links; the retailer may also receive certain auditable data for accounting purposes.

You clock out after a long, stressful day and all you want to do is zone out and play Call of Duty. But being the responsible adult that you are, you know you should probably squeeze in a workout before dinner. Unfortunately, making your fitness routine actually fun isn’t always easy. Enter active video games (AVGs), which, as the name suggests, often requires you to get up off the couch to play them.

Anyone who’s spent time bowling on their Wii or coaxing sweet licks out of their Guitar Hero axe can tell you this isn’t a new concept. But the games and the tech you play them on have been significantly improved in the last few years. Meantime, there’s a lot more research to help you justify investing in a Nintendo Switch, an Oculus VR headset, or other exercise equipment that incorporates elements of gaming as part of your fitness plan. Even longtime trainers are starting to admit the benefits of turning an otherwise sedentary activity into something more physically demanding.

“You have to meet people where they’re at. If they’re playing a video game [anyway], it’s only a net positive if, while doing so, they’re strengthening their cardiovascular health or building muscles,” says Justin Norris, Co-CEO of LIT Method, which counts Jay-Z as an investor. “We’re not one-dimensional beings. I like gaming and I like exercise. I see no reason why those wouldn’t be integrated for people who want to couple the benefits of both, instead of falling into the traditional gaming experience with long periods of stagnancy.”

The trend also works in reverse. More traditional gyms, machines, and exercise classes are utilizing elements often associated with gaming to get people on the mat. “Motivating clients with rewards, milestones, et cetera, seems to have a very positive impact in getting [them] to stay engaged and increase frequency,” Norris says.

So how do you know what to play that’s going to help you break a sweat? When choosing which games or equipment to add to your fitness routine, Norris suggests “picking games that focus on moving in multiple planes of motion, functional training that doesn’t overwork one muscle group and promote a culture of overuse and injury, and [using] the space around you.”

Though AVGs are a great way to score extra cardio and steps on your fitness tracker, Norris points out they aren’t likely to get you into shape entirely on their own. “You need to switch it up. The whole ball game is a regimen that involves consistency and change,” he says. “Make a commitment to provide that consistent movement of your body. But [don’t] betray your body’s very real memory of injury, its need for rest, and its fragility. Have different goals each day, different results at the finish line, and leave your comfort zone. There’s nothing there for you. And regardless of game, platform, workout, or technology being used, [it] should be rewarding from the inside out.”

What Are the Best Consoles, Gadgets and Games for Exercise?

When you’re ready to level up your workout, check out these platforms and games.

There are lots of virtual reality headsets on the market, but Oculus is a good place to start your VR journey. It’s home to the super fun and sweat-inducing Beat Saber, where players slice color-coded boxes to the beat with lightsabers while leaning and squatting out of the way of obstacles. Augment the soundtrack with the latest Billie Eilish bundle or the Skrillex pack.

The Facebook-owned headset has a good variety of games. Scale mountains in The Climb, play tennis with a golf club or bowl with a basketball in Sports Scramble, box as Michael B. Jordan in Creed: Rise To Glory, or shake your booty with Dance Central.

More traditional training experiences can also be had with Holofit or Supernatural. The latter requires a monthly/annual subscription to access trainer-led boxing, stretching, and meditation sessions. New boxing, HIIT, and dance classes are added daily to subscription-required FitXR, which bumps with hits from artists like Calvin Harris and Tiesto. There’s also a collection of cool-down and meditation apps (Nature Treks VR, Tripp).

Oculus Move is the built-in fitness tracker that allows users to track the calories they burn and their physically active minutes, set exercise goals, and monitor progress over time. The company also announced an Active Pack of accessories coming next year to better the experience. 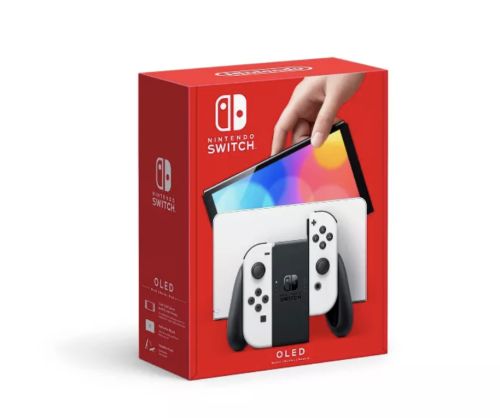 The video game giant has long been the hardware of choice for exergamers. The Switch picks up where the Wii left off and in some ways, like portability, improves on the fit gaming experience.

The game diversity also means you can find light exercise options as well as AVGs that will leave you breathing hard and sweating buckets. The goal to keep people moving is such a high priority that even some of their standard games are getting in on the action. For example, the free Nov. 5 update for Animal Crossing adds group stretching sessions.

The unit can be played through the TV screen or on the tabletop leaving hands free and making it very easy to use as a traveling gym in your hotel room. The OLED model is the newest iteration and it boasts a 7-inch OLED screen, a wide adjustable stand, a dock with a wired LAN port, 64 GB of internal storage, and enhanced audio. 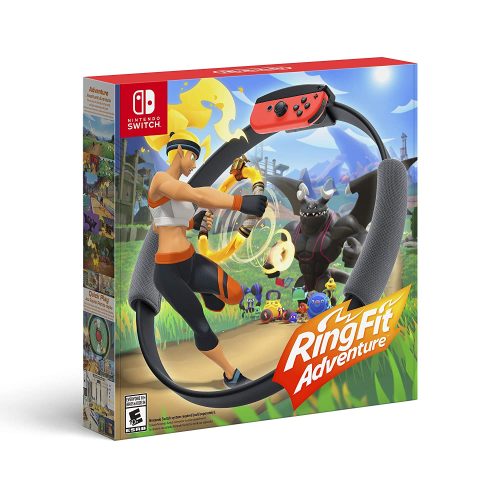 If you invest in only one AVG, make it this hero product of Nintendo’s fitness lineup. The bundle comes with the game and both the Ring-Con and leg strap accessories.

The detachable joysticks from your Switch unit plug into the accessories and track your movements. Once you’ve geared up, there are several ways to burn calories. There’s a fantasy adventure game with more than 100 levels that requires you to walk, jog, paddleboard, or high-knee through levels and defeat enemies using exercises like overhead shoulder presses and leg lifts. 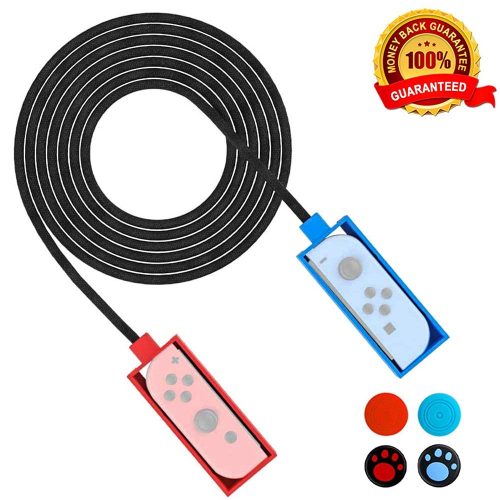 Nintendo released the free Jump Rope Challenge to help entertain Switch users while stuck at home during the pandemic. It is deceptively simple — you just make the motion of the childhood pastime with the Joy-Con controllers — and features an adorable rabbit mascot. If you want to take the challenge more seriously, grab this adjustable polyester accessory from a third-party company that turns the challenge into the real thing. 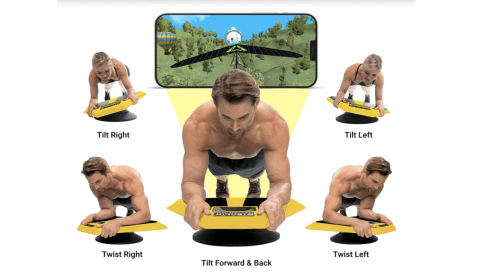 Everyone knows planking is a power move that can help strengthen core muscles, carve abs, and increase stability. But like most things that you know are good for you, planking often is preceded by a wave of dread. This core trainer aims to change that in under three minutes a day. Stealth’s platform, which supports up to 300 pounds and works with all smartphones currently on the market, moves 360 degrees, and all that twisting and turning makes for a more dynamic workout. In fact, our editors have tested it and say it helped them hold a plank for longer than ever without realizing it.

To use it, simply place your phone in the space at the top of the board and start holding your plank. Once you’re using the app, your body and core become the joystick while playing the game. The free app comes with four games (Speed Gliding, Space Escape, Color Chase, and Galaxy Adventure). It also includes a real-time worldwide leaderboard, tracks your daily progress, and can be used to create private challenges with friends. An upgraded version scores new games each month. 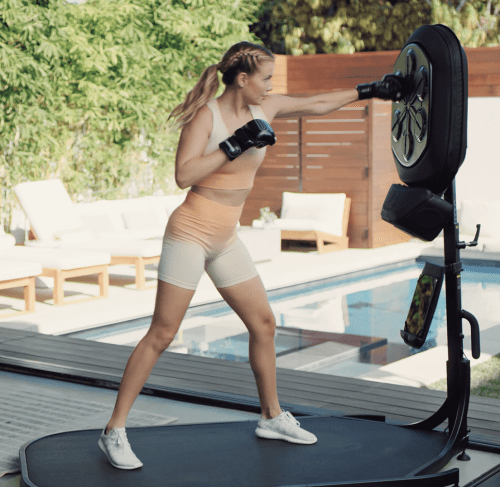 This celebrity-approved boxing system offers serious Dance Dance Revolution vibes, but you use your arms to hit targets instead of your feet. While it looks like a traditional piece of exercise equipment, it deploys gaming tactics (flashing lights, bumping music, rhythmic sequences you have to imitate, and on-screen instructors) to keep you interested and sweating.

Both the free-standing version with a platform base and the new, more compact wall-mounted unit feature more than 200 LED lights, plus built-in sensors and technology to count, track, and measure each jab. There’s also a pad for upper cuts. Pick a song from the library — there’s rock, rap, pop, and EDM hits — and follow the signals to punch on the beat. There are also trainer-led workouts that combine stretching, cardio, and boxing, sparring sessions, warmups, and classes outside of the boxing genre.

Many of those focus on full-body conditioning or use the color-coordinated set of resistance bands. (The bands attach to the D-ring at the base of the unit.) The set contains five bands ranging in resistance from 10 to 30 pounds, doorstops, and ankle wraps. Note: Liteboxer’s early Black Friday sale knocks out, err, off $400 from each machine. 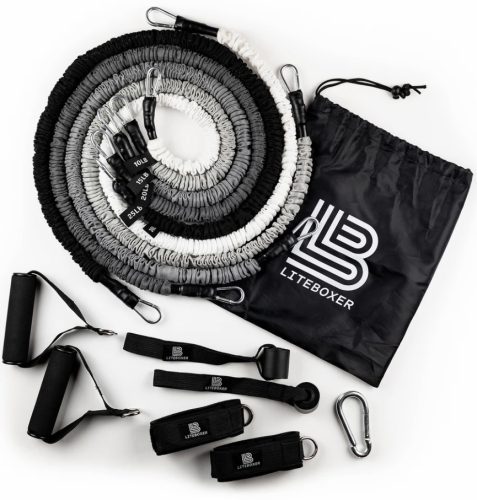 How To Do Scissor Kicks For Strong Abs, From A Pilates Instructor

The Coming Collapse of the U.S. Overall health Treatment Program

How To Do Scissor Kicks For Strong Abs, From A Pilates Instructor

3 days ago Stephanie
We use cookies on our website to give you the most relevant experience by remembering your preferences and repeat visits. By clicking “Accept All”, you consent to the use of ALL the cookies. However, you may visit "Cookie Settings" to provide a controlled consent.
Cookie SettingsAccept All
Manage consent